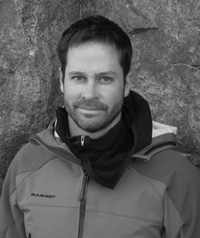 Ian Osteyee has been a CAMP athlete for several years, but unless you are one of the New England ice junkies, you may not know about Ian, the unpretentious owner of Adirondack Mountain Guides. In addition to be a sponsored CAMP athlete, Ian consistently provides us with excellent feedback about our Cassin-brand technical tools, with insight into everything from pick angle to grip sizes. Ian is an AMGA guide, and we recently caught up with him during the heart of ice season on his home turf of the Adirondacks.

What was the New England rock and ice scene like when you got your start climbing?

I've been climbing since 1983 so I've seen more than 30 years of changes.
Climbing was even more adventurous back then and it really made it fun/exciting/rewarding. The lousy gear, lack of route descriptions and lack of people at almost every cliff made it more of a wilderness/exploration thing, and that always sucked me in.

What have been your favorite climbs or new routes from trips around the world?

In the Himalaya I climbed "Losar"(Khumbu, Nepal) with Erik Weihenmayer who has summited everest and climbed The Naked Edge despite beying blind. This is an awesome 14-or-so-pitch route that ends with 2 huge steep pitches of overhanging mushrooms.  The route towers over Namche Bazaar and has Everest and surrounding mountains as a view. Sitting on top, enjoying the view, and describing the scene to my sightless friend, now that's a memory.  "Shaugdro"(Khumbu Nepal") with Tom Drake and Steve Smith, is a 500m first ascent that was WI 5X in the Himalayas.

Any lines from around home that stand out during your winters climbing in the Northeast?

Ascents of Jeff Lowe's "Stingray" WI5 X. Lowe did this sick route in 1996,
our freakish fat ice year.  It took screws, but he still called it a nightmare.  In Feb of '06 I was guiding over at Poko and noticed it looked better than I'd seen it since Lowe did it.  I grabbed Chris Fey, and went to have a look the next day.  I'd found out another climber had given it a try, but only made it up a few feet and backed off.  I went up, the ice felt good, but was only a couple of inches thick. Ifound a frozen rock rap anchor at about 50' and clipped it on my way by.  I thought it might get thicker up higher, but it never came close to taking a screw.

This season I did another ascent of "Stingray" and found another bolt in the upper section of that long pitch….awesome.  We then noticed another smear to the left, rapped back down and did an even thinner, and slightly steeper line we called "Ruination" WI6- X.  It had a rap anchor frozen in at about 100' above the thin rock flake I started the route from(about 150' above the ground). I also found a bolt sticking through the ice 40' above that anchor, that was nice.  I love the thin smears that just show up. There are other great routes, but I think those are the ones that come to mind first.

What keeps you inspired and excited for the next day or the next year? 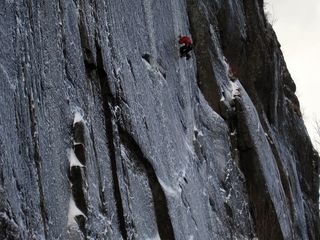 For me, it's adventure/aesthetics. A route just looks right. I've done a lot of climbing, in a lot of places. 2014 might mean climbing in Norway with the bling guy [good friend Eric Weihenmayer], and creeping around the "Dacks" looking for interesting little adventures. Another Nepal trip…..maybe.