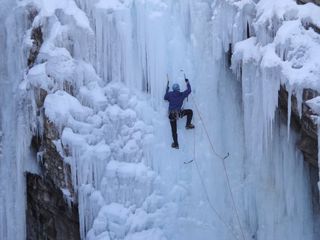 CAMP USA welcomes Colorado-based mixed climber Aaron Montgomery to our team of sponsored athletes. Aaron is a competitor in the world cup of mixed climbing, and was recently asked to be one of 3 American climbers to demonstrate ice and mixed climbing at the Sochi Olympics, as the sport is being considered for future Olympc games!

Aaron is a technician with ice tools, who climbs competetively and has also sent many standout rock, ice, and mixed routes. We recently chatted with Aaron, a tall, soft-spoken Oklahoman who started climbing while in college. He had just spent a day in Vail climbing and being filmed as part of Jeff Lowe's "Metanoia" movie, and Aaron was also recently intereviewed by the Boulder, CO newspaper about his trip to present ice climbing to the Sochi Olympics.

What's your background, Aaron? How long have you been climbing and where do you do it?

I've been climbing for 12 years, and I'm a 32-year-old owner of Ouray Environmental Services. I currently live in the Front Range town of Westminster, Colorado.

What training advice would you give someone who is actively working to improve, be it in a competition climbing or in their own adventures?

Find someone way stronger than you and go climb with them.

Which routes stand out to you as personally memorable or meaningful? 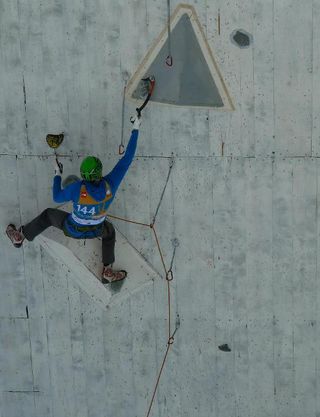 The Shaft, which is a sport climb in the Flatirons near Boulder

And my biggest trip so far: Traveling on the World Cup circuit last year in Europe

What's your training schedule like, especially moving closer to the world cup?

Each week I will typically put in 4 days in the gym and a day of climbing outside.

I hope to compete and enter the finals in a world cup event.

Why did you decide against travelling to Sochi, Russia to demonstrate climbing for the Olympics?

Due to the terrorist attacks, continued threats as well as several personal issues with regards to family and business. [Not attending] first crossed my mind when they were not able to make this a World Cup style event opting to make it an actual ice climbing demonstration instead

Good luck and safe travels as you represent USA in the 2014 world cup!