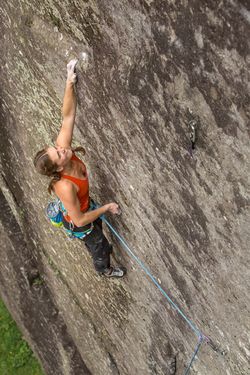 Italy,
the 3rd stop on Paige Claassen’s incredible Lead Now Tour is home to
her most stunning achievement on the international climbing scene. Her ascent
of Art Attack, one of the world’s
hardest slabs, confirms that she is in top shape as she heads next to Japan.
Art Attack has waited 10 years for a second ascent, yet with odds stacked
against her and time running out, Claassen was able to redpoint on October 1st.

I worked on Art Attack for
about 20 days. It was a very frustrating process because the
weather conditions were very bad for the month we were in Italy. It was very
warm and humid during our entire time in Italy, and this made climbing a
slab on granite very difficult. However, I really enjoy climbs that are
technical and require mental perseverance, so this was an important route for
me. I was also interested in trying the route because since Simone Pedeferri
established it in 2004, no one has repeated the route. I spent a lot of time
cleaning moss and dirt off the route, and figuring out very precise beta. The
route is an extension to a 7c, so the crux of Art Attack is the final four bolts of the route. Thin holds on very
poor feet lead to a very long move that required the full length of my arms.
Each day I tried the route, the rock was dry but the air was wet and friction
was poor. However, I had a time limit because we planned to leave for Japan on
October 3rd, so even though the weather was bad, I had to continue
trying. On the day I sent the route, I tried once and fell low and was very
frustrated. I had basically given up, but I decided to try again because I had
no other options. Even though the conditions were quite wet, somehow I managed
not to fall and I finished the route! I was very relieved because this was the
second to last day of our trip and I wasn't sure that I would have the
opportunity to complete the route. I'm very excited and I hope that other
people will want to try this great route that Simone established!

Before Art Attack, Paige also
bagged a fast first female ascent of Solitary
Men (8b/b+) at the overhanging Strombix crag close to Sasso Remenno. During
her month in Italy,
she also visited the C.A.M.P. headquarters in Premana several times where me
made a great interview that will be published soon on the C.A.M.P. website.

The Lead Now Tour is a
mission that Paige is on where she is crossing the
world to attempt significant climbing challenges in 12 countries over 12 months
to inspire people of all cultures to lead a life of adventure. Along the way,
she is attempting to raise $120,000 for local charities that enable women and
children to sustain their own communities while solving diverse social
problems. To make a donation visit www.crowdrise.com/leadnowtour.