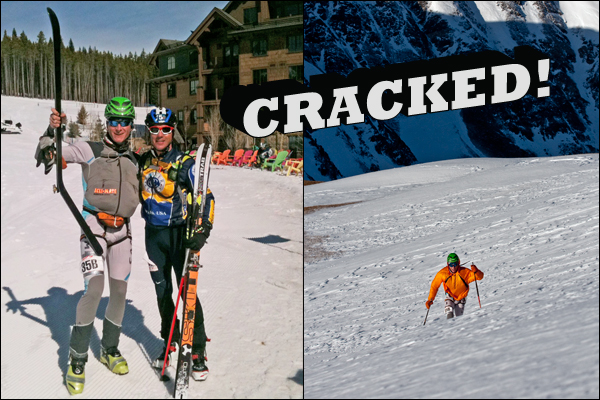 A broken ski could’ve spelled disaster for two rivals turned partners at the COSMIC Five Peaks Race in Breckenridge. Instead, it became a strategy that drove them.

AS I RACED down the first descent on wind-hammered sastrugi snow, I found myself drifting into a tailspin.

“What the hell is going on!” I thought, “I am a solid downhill skier; this cannot be happening.”

I skid to a halt on the frozen off-piste, still in disbelief about what had just happened, and watched the second-place team from Aspen pass by. Now I was annoyed. That’s when I noticed the large crack behind the heel-piece in my right ski. Now I was frustrated AND annoyed! It looked bad, and seemed like it would surely deteriorate to the realm of unusable were I to keep pushing it. The ski was doomed, and therefore so were we. That’s when I looked up and saw Mike.

SKI MOUNTAINEERING is often considered an individual pursuit, but for safety reasons it’s best to go at it with a partner who shares your same sense of risk versus reward. It’s also more fun.

Mike Kloser is a rival and friend and both interpretations of our relationship are equally accurate on any given day. I have chased Kloser on a bike for more miles than I care to count, often coming up short at grand-scale events like adventure racing world championship races. Other times, I have found myself grinning with wide-eyed satisfaction as Mike takes his place below me at some of North America’s most challenging ski mountaineering events like the Elk Mountain Grand Traverse. Of course even here, Mike has ascended the podium one step higher than me.

Though beating him is one of the most satisfying things I can imagine, there is no one I’m more honored to lose to than Mike Kloser. In short, Kloser is my nemesis. Anyone who grew up reading comic books knows that the superhero is only as strong as his nemesis is great.

This potential to create a dynamic duo that would kick the crap out of the diabolically strong competition is why Kloser and I originally decided to join forces for the Five Peaks race—an epic battle involving 80 other teams that go up against 8,000 feet of vert and multiple ascents in the Ten Mile Range behind the Breckenridge Ski Resort in Colorado. We saw the opportunity to combine our skills, gumption and raw physical power into an unstoppable force.

Okay, we are also friends. But this is really beside the point because neither of us is tending to a friendship when racing. We were there to WIN.

We had summited Peak 9 in first place, battling the elements on what was supposed to be a “spring-like day.” In Breckenridge, this can mean colder than a nude dip in the Arctic Sea and today the moniker of “Breckenfridge” was more appropriate. Kloser and I had charged this first peak like machines, and after a smooth transition, we were on our way down. That’s when everything went wrong.

Beyond all understanding, my ski had somehow broken. It was difficult to know what to make of this because it wasn’t supposed to happen. I yelled across the slope to Mike and told him to keep going as I picked myself up off the snow. I was ready to give up. How does one summon the motivation to continue fighting a battle that just can’t be won?

I made my way down to Kloser. The descent was slow and cumbersome on the broken ski. I arrived at my partner and he said nothing. He simply stared and waited with the tight-lipped reserve of a Roman general. His eyes: understanding, driving. In them I saw a mutual chord about to be struck. It was enough to simply think back to all the adventure races that we’d endured together as both competitors and partners. The teams and racers who manage diversity best, win. Those who crumble under adversity, don’t. 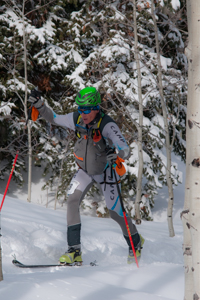 The goal became clear, if admittedly absurd. Punch it with reckless abandon until the ski breaks completely. Even then, don’t stop going—not until the officials drag us away from the race like captured wild animals lashed to the backs of snowmobiles. That was the mentality, anyway. Any time we would lose on the descent we could try to make up for on the way back up. This meant a total disregard for pacing and strategy. It was a go balls-to-the-wall till the ski snaps strategy.

Because in the back of my mind I was sure the second outcome would occur long before the pain of charging so hard would take hold, our “strategy” was easier to accept, at least mentally. But to our surprise, the strategy began to work and soon we were swapping leads with the Aspen team on the second climb. As expected, they pulled away in dramatic fashion on the descent. Then, Mike and I clawed our way back to match them on the third uphill. There was no dialogue between Mike and me—only this faint glimmer of hope that each of us mutually shared. It kept us going harder than either of us could have alone.

Sadly, the writing was on the wall. Without being competitive on the descents we had no hope of ultimate victory as the course finished with a long, technical descent off Peak 6.

Second place is losing no matter how you slice it. But we were flying high in morale. These are the kinds of epic mishaps that lead to breakthroughs in our understanding of what’s possible—something we’d never have experienced had we just thrown in the towel or simply finished the race.

If anything, the race taught us one thing: if we have the opportunity to team up again in 2012, no one will stand our way. No one!

The FIVE PEAKS is one of many races that make up the USSMA Colorado Ski Mountaineering Cup (COSMIC). If you fancy yourself a backcountry skier and enjoy the adrenaline of racing and you've not checked out this scene, get on it. COSMIC races have a similar pulse to cyclo-cross. A crazy crew ready to strip the gear to nothing and endure the burn as they charge the ups and rail the downs with abandon only to say they did it.

As a founding sponsor and leader in lightweight rando gear, CAMP will be present at COSMIC races this year with demo gear and prizes. We are also proud to stamp our name as title sponsor on the FIVE PEAKS race in Breckenridge, one of the few team events in the series … a race sure to become a classic like the Elk Mountain Grand Traverse.

Check out the 2012 schedule at http://www.ussma.org/cosmic. We hope to see you soon!