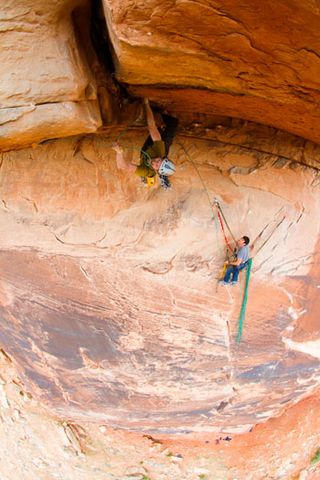 Click Here if you still need to read Part 1.

By 2:00 in the afternoon, the Honey Dripper was officially dead … for the season. It seems I swooped the second ascent of Silver Surfer with zero time to spare. And when the ice melts out, it is time to climb rock. By 5:00 we were eating dinner in Grand Junction, Rob about to explode like a Coke with Mentos, antsy to crush his project in the morning. His wife Jane feeling particularly pregnant. Segway … how do girls do it? If I felt sick everyday and had to carry a melon on my belly for 9 months, I am certain I would also not move for 9 months. It puts climbing in perspective. The hardest I have ever tried to climb still cannot compare to child birth.

But Rob’s new route in the Monument would come close. Spec One climbs a pitch of good mud to a left-leaning crack system, then traverses right across a leaning hands-free move (very cool) before reaching the base of the roof that blasts 20 feet to the lip, perfectly horizontal, through a varied crack that starts with slopers, moves to fingers then widens to fists (even cooler). Seemingly short, this roof is sure to feel like giving birth for even the most seasoned desert climbers. The moves are long and it ain’t over until you’ve rounded the lip. Oh, the pro is pretty sketchy too. It holds, but only because cams can keep expanding while the rock around them crumbles.

Undiscovered routes like this (ie awesome) in places like the Monument (ie accessible) always surprise me. I am fortunate to have many friends who enjoy the adventure and creativity of new-routing and they all work really hard to find the untapped gems, string them up and bag the first ascent before anyone poaches. I have seen a single route require every non-working waking minute of the day for friends when they’ve discovered a true gem. The right new-route is all consuming.

This is the mindset Rob was in when he agreed to climb with me on Saturday in exchange for partnering up for his first ascent on Spec One on Sunday. We hiked into the Monument with temps feeling chilly. We wondered if it might be too cold. In hindsight, I think it might have been a touch too warm if the clouds had dissipated completely. Fortunately they didn’t. Such is the way of the desert. Rob was laced up and climbing within two minutes of getting to the base of the tower. He motored up the first pitch. I followed a series of precarious mantles on sloping ledges and jugs still covered in dust and dirt. He continued up and tipped right through the no-hands move, then finished the slab leading to the belay under the roof. I followed. The second pitch is a blast and worth climbing in its own right. The crack is still dusty, but climbs well with awkward reaches between flared jugs and finger locks. The no-hands move blasts straight right where the crack turns into an A4 seam. Get your left foot high in the pod in the crack, reach right to a good hold. Now you are stuck. Negotiate the stem to catch the little chip with your right foot about five feet out on the face. Lean. Lean. Keep leaning. Hands are floating in the air, the foot is ready to rip. At the moment you start reeling backwards, thrutch in and catch the big side pull a full seven feet from the crack you tipped out of.

As I grabbed the side pull, I felt the foot hold crumble. When this happens in the desert, it is best to stay put. Sand is surprisingly resilient to the right pressure and surprisingly unresilient to gravity. I stepped my left foot through and climbed to a stance where I could look down and watch the hold drift away in the slight breeze now stirring the valley. The even smaller chip is now the standard foot for this move. It still goes at the same grade, just more precarious.

First ascents on desert routes are often like reverse chipping. You pull on every little flake trying to get a rest from the dusty jams and locks. Most of them fail immediately, others take a few attempts. The route gets harder before it gets easier again. Once the flakes are gone, you really focus on the cracks and these start to widen as you yard harder on the jams. The route gets a little easier, but it changes with every attempt so it remains difficult. 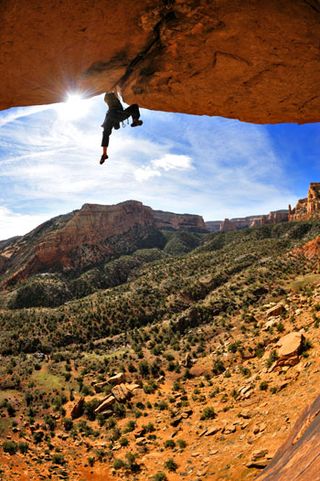 Rob starts into the crux roof and pitches about halfway through. Off the dusty jugs, he places a half-inch cam, tensions into the sloping jug rail, places a one-inch cam, locks hard on his pointer finger in a perfect finger lock, places a two-inch cam, crosses to the offset hand jam (big moves), places a three-inch cam, crosses again into the four-inch crack before the lip (bigger moves), whips. The roof is just shy of twenty feet from the base to the lip, but rounding the lip adds about six feet of physical climbing to the sequence. The whole sequence is about eight moves long averaging out to about three feet per move. To stay on, you rely solely on body tension with bad heel hooks, toe hooks and deep heel-toe cams. Rob sent on his third attempt that day. He nearly pitched just after rounding a lip. A precarious ‘rest’ allows you to get something back before climbing the finger crack to the top. He was so pumped he hung out here for almost ten minutes. He was unsure if he had pumped himself further or recovered enough when he set off up the finger crack. When I rounded the roof and started ‘resting’ where he had, I slowly set to flaming out … completely. A rest! Dusty finger locks and flared tight jams with awkward feet scrunched up over the lip of the route.

Rob rated the route 5.13. It needs a second ascent. Bring cams from 0.3 – 3.0 inches. Bolts protect areas where the cracks are crap and there is a bolt at the lip on the roof to keep the rope from getting sucked too deep. The approach is fifteen minutes downhill. The climbing is rad, the roof is big. You’ve run out of excuses.

It is fun to watch Rob on first and first free ascents. He is an intensely creative climber unafraid to throw himself at dirty, crumbling rock, under which he knows a gem awaits. He would have made a good miner … his education was in geology after all. The name Spec One comes from Chipotle. Running late and trying to get out of town for the Outdoor Retailer Show in Salt Lake City several months earlier, he and videographer Chris Alstrin swung by Chipotle for a roadie. Rob’s wife Jane had won the Turkey Trot running race in Ohio a month earlier and had two gift certificates for free burritos as part of her prize. Rob, of course, took them. Seemingly simple, they ordered two burritos and handed over the certificates.

‘I don’t know what to do with these. They aren’t even from Colorado,’ a frustrated blank stare washed across the cashier’s face.

‘Figure it out. They’re certificates for free burritos,’ Rob replied, equally confused. Can it really be this hard?

Two cashiers and a manager later, they were back on the road. Cashier one had to call cashier two who had to call the manager. After fifteen minutes of tinkering, manager blasts cashier two with a cold stare, glances in the direction of Rob and Chris, clearly annoyed. In a tone to match his stare, he says, ‘just spec one it,’ turns abruptly and storms to the back.

Just spec one it … what the hell does that mean? I’ve seen Chris rigging, dropping, and breaking the most curious contraptions I’ve ever seen trying to catch climbing footage. I’ve seen Rob pulling blocks the size of small children onto his chest cleaning new routes in the desert. And I’ve been with them while they are doing these things simultaneously. A comedy of chaos, evidence that they are both nuts and are easily obsessed. So you can imagine the six hour drive to Salt Lake City.

Just spec one it? By the time I saw them the next day, they could have written a book on the subject. It became the obvious choice for Rob’s next big first ascent and an unclimbed twenty foot crack in the Monument freed at 5.13 certainly seemed to qualify. I like the part of new-routing where you get to pick the name. The process takes many hours, many beers and much vigor. But this one was easy. At the top of the tower, I asked Rob what he was going to name the route. With a grin masked by a cold stare and an air of righteousness he says, ‘Spec One,’ and walks away. He tells me the story on the drive out. Perfect fodder for my own solo drive back to Denver.

The drive back is four hours. I am home by 6:00, a second and first ascent under the belt and all because I made a new year’s resolution to get in the car every time I have the impulse to go. No excuses about being sore or busy or not in the mood. Pack the gear, get in the car, go. I can fret once I get there, but at least I will be there. But every time, I find once I’m there the nonsense starts to erode and the psyche starts to rise. Like a phoenix rising, I can shed the weight of yesterday and focus on today. Climbing really is the best way to waste time and a thirst for adventure is the ticket to creating memories that will endure. Thanks to Rob for the catch on Silver Surfer. Thanks to DR for the bolts and to him and Cliffy for the video and stills. Thanks to the Monument for undiscovered desert roof cracks and thanks to Keith Ladzinski and Chuck Fryberger for the photos and videos on Spec One. Thanks also to my non-descript Corolla aptly named Car for getting me there and back safely and thanks to my new year’s resolution. Time for beer!