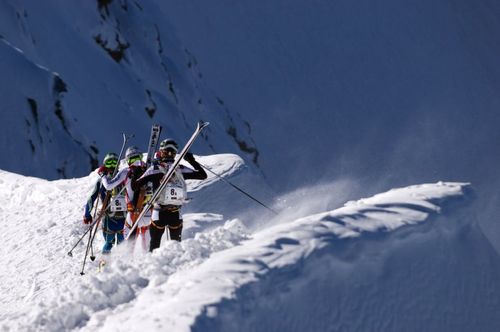 The 2010-11 ski mountaineering race season has finally come to a close with the Mezzalama and CAMP athletes were once again in the lead pack where they could be spotted most of the season.

Michele Boscacci and Robert Antonioli took third, an excellent position considering it was their first Mezzalama.

CAMP athletes also raced into fourth position thanks to Alessandro Follador and the Slovenian Nejc Kuhar. They crossed the finish line just 9 minutes after the lead group.

Disappointment was in store for Damiano Lenzi who was in prime condition leading into the end of the winter. His team was one of the favourites, but was forced to withdraw due to very low temperatures during the race.

In the women's field, Francesca Martinelli, Roberta Pedranzini and Gloriana Pellissier demonstrated their expertise coming in ahead of the favourites Mirò and Roux and finishing 18th place overall.

With the close of season, we want to congratulate all the members of the CAMP team and every person who raced this year. We look forward to seeing you all again next year and just like CAMP gear, we hope you will return lighter, faster and stronger!

In the picture: The team of Robert Antonioli and Michele Boscacci (Photo courtesy Riccarco Selvatico – info@areaphoto.it)