I had the opportunity to live the dream a few weekends ago when I settled a vendetta with a new mixed route near Redstone, CO and then accompanied our athlete Rob Pizem as he established a new line on a tower in the Colorado National Monument. For me, climbing is first and foremost about adventure and exploration. Secondarily, it is about strength of body and mind and realizing demanding goals. I describe this particular weekend as living the dream because it combined all of these aspects in a striking way. I left for Redstone on Friday evening and met up with Rob at a buddy’s house in Carbondale. He had sick fajitas coming off the grill and we spent time around the table catching up. Rob and I drove a half hour down to Redstone in the morning. In Coal Creek Canyon, Duane Raleigh and Jeff Jackson, publisher and editor respectively of Rock & Ice Magazine, have been establishing amazing new mixed lines on a West-facing wall that rarely sees ice bonding in any sort of meaningful way. This year, for some odd reason, the ice was rad. It ranges from a quarter inch to four inches thick and bonds to the porous red conglomerate remarkably well. The route I was after is called Silver Surfer. It is an M9 established by Duane Raleigh that travels over slabby stone with few features, through a short roof, then to a sheet of thin glory ice to the anchors. The bottom third is all about begging for picks to stay put. The roof requires a sketchy stein pull between two slabs of rock with no features to catch the pick or hammer, then campusing up over an ice bulge. The upper third takes one short screw. I had tried to onsight the route the previous weekend during the Redstone Winterfest and got tossed from a precarious mantle in the very worst place to take a fall on the entire route. It was a 35 footer that bounced me off a ledge, flipped me sideways and sent me splatting into the slab below. Remarkably, I was totally fine, climbed up again with one tool (the other was stuck in the ice 40 feet above me) and finished the route. I top-roped the route that day with relative ease, but when I went for a redpoint burn, the ice had rotted to a point where the picks would not stick and and crampon points just sheared right out. The red stone on which these routes form up radiates heat and I had discovered that these are morning routes, best get them done before noon or the ice will probably be rotten. 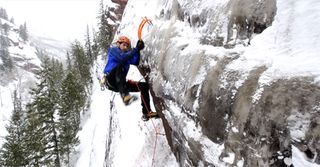 I was lucky the next weekend when I showed up and the ice had crept about four inches lower offering me a pick placement at the second bolt that would ultimately allow me to get through the crux where the ice had rotted out the last weekend. It wasn’t much, but it was enough! I fired the route on the first go, but it was not without its trial and tribulations. The conditions were downright wintery. We post-holed up to our armpits (I am 6’2”) and snow covered much of the route requiring me to spend time on route scraping off slabs to find the point placements I had used the week before. The ice had also formed up in such a way that about a half inch of junk ice covered the small amount of good ice below. I had to make extra kicks to make sure my crampons would penetrate the good ice instead of just shearing out of the junk ice. If I kicked too hard, the ice below shattered out. Not hard enough and I would slip out of the crud ice. Nonetheless, I sent and bagged the second ascent! Duane Raleigh was filming so I even have a few good stills to document the occasion here. 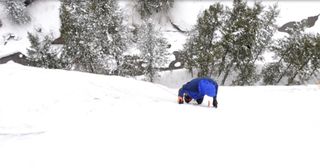 M9 is one thing when you are climbing out a juggy roof to a curtain. It is another thing entirely when the route feels more like a 5.12 slab and the slightest tweak of a tool means you are coming off. I think the new routes in Coal Creek Canyon are some of the best mixed climbs I have ever seen because they are true mixed routes from bottom to top. They are unclimbable without the trickle of ice that bonds to the undulations in the rock, but they come together as beautifully delicate and conditions-dependent gems when they can be climbed. They offer a sense of improbability that is becoming increasingly rare with the advent of bolts and manufactured ice. Truly gifts of nature that pale only in comparison to the route I would be a part of the next day … TO BE CONTINUED.