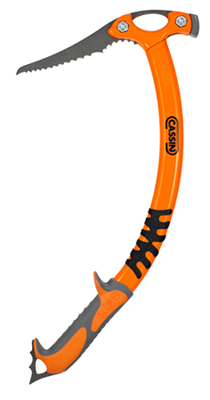 It is here. The new Cassin X-All Mountain Tool. After three years of research and development in close cooperation with our athletes, we are proud to release a tool that incorporates the many aspects of the CAMP Awax climbers have come to love while improving on other elements along the way. The Awax was well known for its ability to generate solid sticks from a single soft swing. This was a marvel of engineering as the Awax was also the lightest technical ice tool on the market. The solid sticks were the result of a perfectly balanced head and aggressive pick. The pick was probably the most notable part of the Awax. Its aggressive beak, thin profile and optimized tooth configuration were a refreshing alternative to the blunt picks found on many new ‘mixed tools’ that seemed to climb rock fine, but either bounced off or broke ice especially on lower angle or brittle ice routes.

Ian Osteyee, one of the leading ice climbers in the Adirondacks and Erik Weihenmayer’s personal guide, was integral to the development of the All Mountain Tool. He entered the project with the belief that a single tool could truly handle all of the various ways we use ice axes on big alpine routes. At that point, the closest thing he had found was the CAMP Awax, but it was still lacking in certain ways. He found he had to optimize the handle with grip tape and some manipulations with a router to get the comfort he was looking for. He also had to jimmy with aftermarket pommel attachments to create a second pommel for leashless climbing. One thing he never had to futz with, though, was the pick. When Ian saw the modular systems of the Cassin X-Dry, X-Ice and X-Alp tools, he likened it to the Holy Grail. When he realized the head components (pick and hammer/adze) were separate, he knew this was a winning combination if the pick could be optimized for performance equal to the Awax. That was the last part of our development and after much early-season field testing, we have succeeded.

To Awax lovers, we can say sincerely that the new X-All Mountain Tool from Cassin is the new Awax. For ice climbers who have experienced the frustrations of pick bounce, ice bashing and shoulder fatigue common with the more aggressive ‘mixed tools’ now so popular on the market, we encourage you to swing the new All Mountain Tool. The Awax was routinely the favorite at ice festivals featuring demo tools from all the major brands. Its modest design and optimized pick angle created a tool that truly climbed all angles of ice with exceptional performance. In this way, it created many converts and took on a cult-like identity. With the new interchangeable grips, and the separate head components, the All Mountain Tool goes one step beyond to produce an axe that not only climbs all angles of ice with consistent grace, but can be modified quickly and easily for leashless configurations, dry-tooling, even lower angle glacier routes.

In Ian’s words, “No longer will you have to change tools and get used to your alpine tool’s swing, or get caught in an unexpected tricky, technical situation with your non-technical tools. The All Mountain Tool can handle everything you throw at it.”

– Optimized pick angle and tooth configuration climbs all angles of ice and rock. – Interchangeable head components make switching between an adze and hammer or replacing picks simple and

affordable. – Interchangeable grips come in three varieties for leashless, leashed and alpine or snow climbing. They all bolt

onto the shaft with one screw and because of their dual density molded construction, they dampen vibrations

with lanyards. – The All Mountain Tool is ultimately a combination of the best elements from the Cassin X-Dry, X-Ice and X-Alp

tools (aggressive shaft curve, hammer head, double-pommel grip, large spike) with an upgrade to the All Mountain Pick that optimizes the tool for Awax-like performance.