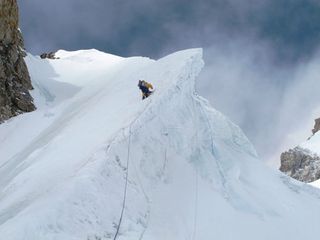 Simone above camp 2 Down with the third! Simone Moro has tackled his third 8,000 meter pick in winter conditions with their ascent of Gasherbrum II, the thirteenth highest mountain in the world and the first peak in the Karakorum range to be climbed in winter. The team, which included fellow speed climber Denis Urubko and American alpinist and photographer Cory Richards, reached the summit at 11:28 local time on February 2nd. They were forced to take advantage of a short weather window climbing in light and fast alpine style.

This is an extraordinary milestone and confirms the unmatched strength of the Moro-Urubko partnership for climbing the world’s highest peaks in the coldest temps in the fastest style. The team of three arrived at the summit just 20 days after arriving in base camp demonstrating an uncanny ability to adapt to the inhospitable conditions of the Karakorum in winter and acclimate for a light and fast assault on an 8,000 meter peak.

Remarkably, this is Simone Moro’s third winter ascent of an 8,000 meter peak. GII is added to his 2005 winter ascent of Shshapangma and Makalu in 2009. He is ahead of the rest when it comes to cold weather, high altitude climbing, joining the ranks of his Polish predecessors Kukuczka and Wielicki who brought the winter climbing mentality to the Himalaya.

For Denis Urubko, GII adds yet another first ascent to his list of record setting climbs. He has received much international recognition for tackling his 8,000 meter peaks in record times, establishing three new routes on Broad Peak, Cho Oyu and Manaslu (now add GII), and now making his second 8,000 meter winter ascent with Moro and Richards.

Many can still remember the images of Moro and Urubko on tips of crampons and axes dancing across the final meter to the summit of Makalu … it seems like only yesterday. With GII, it is clear that these two will go down in history as trend-setters for high-altitude climbing. Their pace and poise bring visions of dancers glancing their way through previously untrampled mountain terrain.

CAMP is proud and honored to once again be at the sides of Moro and Urubko as they continue their dance. Their abuse of CAMP gear is precisely the kind of feedback that allows us to continue forging the future of alpine climbing gear, much the same way Moro and Urubko continue to forge the way forward at the highest elevations. Thank you Simone and Denis for allowing us to be a part of yet another successful expedition! 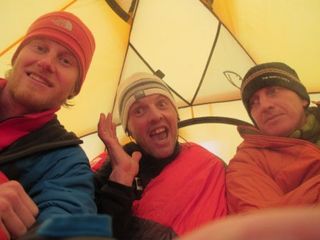 Simone, Denis & Cory at base camp