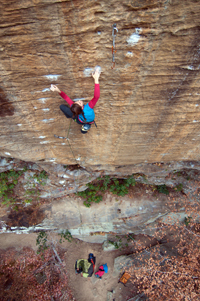 CAMP rocklete Paige Claassen recently became the first woman to climb an undisputed 5.14 east of the Mississippi witht her redpoint of God's Own Stone in the Red River Gorge. We had the chance to ask a few questions following the send …

1. Your ascent of God's Own Stone is likely the first non-debatable 5.14 female ascent east of the Mississippi River. Nice work! Are you surprised that you would be the one to capture this notorious female first?

Paige: Well, I would say Katie Brown, Whitney Boland, and Andrew Szekely's ascents of Omaha Beach are definitely notable. It's very inspiring to be a part of a movement of such strong women crushing and pushing away mental obstacles to where our limits lay.  It doesn't matter who does a particular route first, the point is that women are climbing hard together. It's cool that this is happening everywhere, not just on particular routes or in particular areas. This is an incredible time for our sport and I'm really excited about the direction we're headed.

Paige: In good temps, I would say an 8. In October, when it was hot, I wasn't very fond of the Red because it ate my skin and I couldn't grip anything. I think the Red's reputation for pumpy ladder climbing is inaccurate. When you're able to take advantage of all the different walls, its truly amazing. Each wall is unique. You can climb on any angle, to any height, and basically grab any type of hold you want. Plus, the scenery is beautiful and being out in the country brings a nice change of pace to life, even if it is only for a weekend.

3. You worked God's Own Stone over the course of three trips. Did you open any other projects at the Red along the way?

4. If 5.14a/b is your redpoint limit, what is your onsight limit (fellas – something to aspire to)?

Paige: So far, the most difficult route I've onsighted is Flour Power, 5.13b at the Red. But hopefully that isn't my limit. Lately I've been trying to project more than onsight. I used to do the opposite, but I think it would be fun to take another trip where I give really focused onsight burns on more difficult routes.

5. God's Own Stone is a great way to kick off the cold season! Any other projects you intend to crush during the prime months for sending temps?

Paige: It's definitely more difficult for me to try my best when I'm cold. But in the spirit of pushing limits, I need to increase my cold threshold! I'd like to try a few things around the Front Range of Colorado and then pick a winter project or two based on that. I'll see where that takes me!