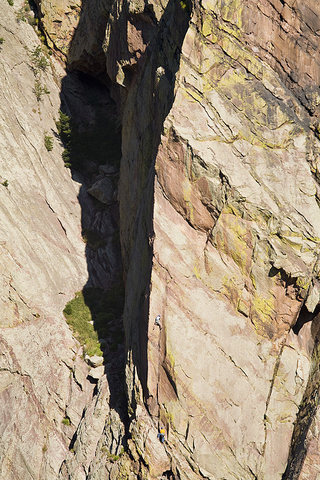 I love to set goals for myself, especially ones that initially seem a bit outlandish. The Naked Edge is THE line in Eldorado Canyon, and one of the few longer routes there which obviously begs to be climbed. The idea of a speed ascent of the Naked Edge itself was first proposed to me by my friend Scott, after he and I linkup up Le Toit, Rosy Crucifixion, The Naked Ege, the Doub-Griffith, Vertigo, and the Yellow Spur (24 pitches, almost entirely 5.10 and 5.11) in under eight hours, earlier this fall. We figured that a round-trip climb of the Naked Edge was doable in a time approaching 82 minute mark set by Bob Rotert and Dave Vaughn.

Having climbed the route recently, we knew that a tiny rack and 50m rope were sufficent to climb safely, and would keep us moving faster. We settled on 6 cams (Green, Yellow, Red, and Green/Yellow Alien, Red and Yellow Camalots), 5 dyneema QDs, and 5 single runners, each with 2 wiregates. Assuming 15 minutes of solo scrambling to reach the base, and 15 minutes to descend from the summit to the road, we'd have to average 10 minutes, as a team, on the route's 5 pitches. I would lead the first two pitches as one (45m, 5.11-), then Scott would swing through and lead the longer and easier 3rd pitch and catch his breath as I followed. Scott then linked the final pitches together (50m, 5.11-) and I followed, after which we began a race down the East slabs. Despite 50+ MPH wind gusts that had knocked over garbage cans and streets signs along the road into the park, we headed up the route quickly, exploiting our knowledge of the in-situ pins and fixed gear. The Naked Edge is aptly named, as the feature is the most prominent prow of sandstone jutting out into the Eldorado Canyon 'wind tunnel'. Swinging around the prow of the arete on pitch 2, I was very nearly blown out of the flaring pinscars that comprised a bit of runout climbing atop my lead block.  Despite the wind, we climbed the route quickly, and although I down-slabbed myself into dead-ends a few times on the descent, we ran down the final few hundred feet of trail to reach the road 73 minutes after leaving it. In the future, we could definitely improve on our time via less-conservative leading (calmer weather would help) and by having the foresight to learn the descent before trying to race down it.