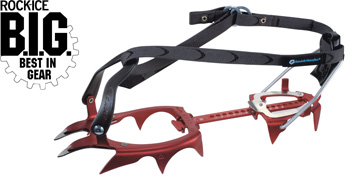 The C.A.M.P. XLC Nanotech has won the 2009 B.I.G. (best in gear) award from Rock and Ice magazine. Now in it’s third year, the annual B.I.G. award goes to select gear that has proven itself in the field. For 2009, over 100 products tested—10 received the award. “Gear that earns a B.I.G. award,” says Rock and Ice editor Jeff Jackson, “was taken out in the field, hammered, and came out on top. If you see the B.I.G. logo on a piece of gear, you know it earned it.”

The XLC Nanotech was selected for being a superlight mountaineering crampon that blends an aluminum frame with steel front points. “The crampon weighs about half that of a traditional steel model, but, because it has steel front points,” says Rock and Ice publisher Duane Raleigh, “it holds up to water ice. I even wore it on mixed rock routes, and it held up amazingly well. It’s the perfect crampon for anyone tackling mountaineering peaks such as Rainier, Hood, Shasta, where you mostly snow climb, but can run into stretches of ice. I’d even take it up Denali’s West Buttress.”